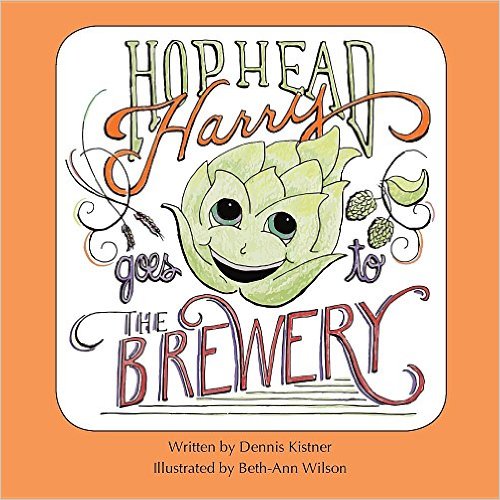 One day not too long ago, Baltimore artist Beth-Ann Wilson had a frantic Dennis Kistner run up to her car window and ask her to draw a cartoon of hops for him. Since she’s also a Baltimore bartender, little surprises her. Oddball requests are commonplace in these parts. But even she was impressed when Kistner, who works at Mahaffey’s Pub in Canton, delivered to her the rhyming stanzas of a children’s book about a little guy named Hophead Harry.

“I didn’t hear from him for another month or two and then we got together and he presented me with the text for the book and the rest is history,” she said from Highlandtown’s Snake Hill Tavern this week.

Kistner grew tired of reading the same books to his son every night and wanted something they could both enjoy. He couldn’t find what he was looking for on Amazon, so he wrote his own book and put it on Amazon.

“Hophead Harry Goes to the Brewery” debuted this spring, and Kistner got a few jokes about it, but once people started reading the book, they understood it’s a beer tome that holds its own.

“The first responses I get were joking about how the characters are going to be slugging beers back but there’s not a sip of beer drank in the entire book. It’s more about the process. Once people look at the book and read it, they kind of understand. It’s a rhyming book and it could be about making cookies or it could be about beer.

A sequel might be in the works. A wine-themed book and a trip to Oktoberfest could be in Harry’s future and that’s a good thing, because little Dennis likes it when Dad reads to him.

Order the book on Amazon, or pick up a copy at select Baltimore area events and craft beer destinations, including Mahaffey’s Pub in Canton.You can also check out the talented works of Beth-Ann Wilson at BethAnnWilson.com or at gallery space that she’s opening next month in Highlandtown.