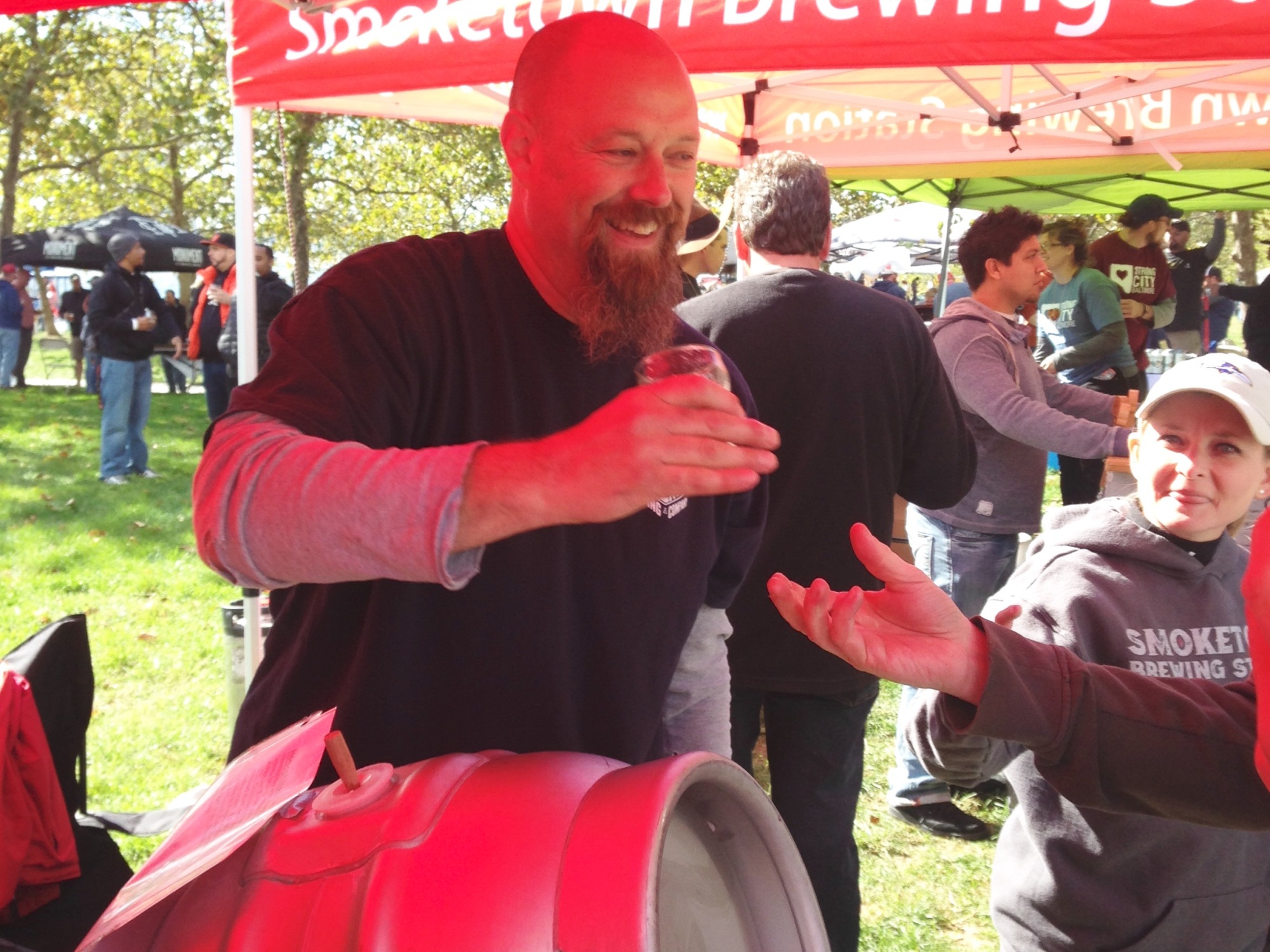 We had BeerBaronTV Camera 1 out at Saturday’s 2nd annual Baltimore Craft Beer Festival presented by the Brewers Association of Maryland at Canton Waterfront Park. Of the dozens of beers we sampled at the event, there were some offerings that needed further explanation. We’d heard of some of these places, but not all of them. That’s a testament to the exploding craft scene.

Union Craft co-founder Adam Benesch is a rock star. You can see him on the M&T Bank commercials during the Ravens games more than you’ll see those Matthew McConaughey Lincoln ads. And yet we’ll give Benesch a big hug every time we see him, the exact opposite of  what we’d do to McConaughey. He joined us with a one-day-shy-of-37  Union compatriot Jon Zerivitz to try to stoke some good-natured rivalry amongst the brewers.

Phillip Rhudy of the Independent Brewing Company poured me a Hopkins Harvest Ale, finished with Cascade hops farmed from the Hopkins Family Farm by the brewmaster. Four hours after picking, the hops are in the kettle. The Bel Air brewery is associated with the Chesapeake Malting Company, where they’re also producing the malts that brings the body to the beer on the same farm.

Brian Roberts is a full-time scientist and a part-time brewmaster. His Mad Science Brewing features some medical monikers like Hemophiliac, Zika and Antidote. The brewery is located in Adamstown in Southern Frederick County . “We sit on Thanksgiving  Farms, a 57-acre garden center and produce farm. We grow our own hops. Right now, we have about 200 hops in the ground. We look to expand that to another 50 which will sustain us for what we do,” he told us.

Henry Ruhlman runs Ruhlman Brewery, a small Hampstead brewery on a 38-acre farm. They also started growing their own grains this year, and their Tavern Holiday Ale uses the malt and their 5th year hops.

Barley & Hops is a brewpub & restaurant in Frederick that’s been around since 1999. Though not the brewer himself, friend and rep Doug Wright represented them well as he described the pour: the Barbarian DIPA, which is dry-hopped with Jaryllo, Simcoe and Soriachi Ace.

Julie Verratti minds the kettle at Denizens Brewing Company in downtown Silver Spring, with its attached restaurant and taproom.  She poured me a Third Party Trippel, a 9.3% ABV that we could still fully taste and enjoy after we’d already had many other beer samples cross the palate that day. “We actually distribute our beers in cans at Old Vine, Bo Brooks and the Wine Source, ” she told me, so this brewer has already sneaked into Charm City without our prior knowledge. How dare them!

We talk about terroir with wine all the time, and we’re starting to with hops and grains. But what about the people who make the beer and grow the ingredients? To us, there’s terroir inside them as well. And meeting them makes us enjoy the fruits of their labor a little more.