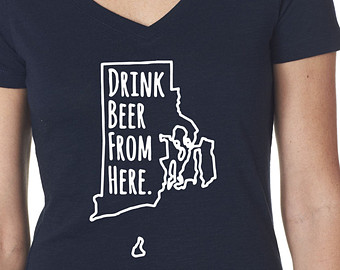 Rhode Island is Mrs. Beer Baron’s ancestral state. It’s the smallest state, and for years, it had a small craft palate. I started spending a week or more every summer in Rhode Island about 12 years ago. At the time, Narragansett was king. The Trinity Brew Pub was the only game in the state, and with little craft competition in sight, it held the title of Rhode Island’s biggest brewery for a long time.

Those days are over. The Ocean State has been baptized in beer over the last several years and 2017 marks another frothy high point in the lightning-fast growth of the industry. What began as a traditional beach week for me turned into a beer tourism adventure, and one I can’t wait to return to next year.

I began my beer quest in Providence at the famed Trinity Brewhouse at 3:00 on a Thursday afternoon. I’d come to Providence to try the suds at Long Live Beerworks, an upstart brewery in a small office park in Federal Hill. I looked forward to trying the ‘Old Guard’ ales and lagers of Trinity first.

Inside the cavernous bar in the shadow of the Dunkin’ Donuts Center, there were only about six customers. I chatted my way through them and quickly discovered they were all beer tourists, and all of them were doing the exact same thing as me: killing time before Long Live Beerworks opened at 4.

The bartender had a nonchalance about the beer there, and that and the bar bereft of locals left me with a maudlin feeling about this place, like it’s a dying relic of Rhode Island Craft. I enjoyed the solid RI IPA, but passed on another pint after a sample of the Screaming Viking, a wheat ale with ginger and cardamom.

If Trinity felt like a wake, Long Live felt like a revival. I got there at 3:55 and there was already a 40-strong line to the door. There were beer nerds from all walks of life in line: mechanics, attorneys and professors. My beer optimism was growing when a slick-haired guy opened the door at 4:01. Instead of welcoming guests into the tiny brewery and tasting room, he slowly sauntered to the end of the street and dropped a sandwich sign emblazoned with “BEER!” onto the sidewalk. He then casually walked over to the mailbox and closed up the empty receptacle before moseying on back inside the brewery and flinging the sign to OPEN.

I was like, “got to be some lazy millennial. If only his boss had been here to see how he ignored the adoring masses.”

You guessed it. He was the boss. And it turns out Armando DeDona wasn’t a jerk after all. He just makes great beer and was horribly understaffed that day. The Hopeless Romantic DIPA (8% ABV) had a piney bite to it that I didn’t expect, but it’s now-familiar orange milky color and citrus notes made it an extremely drinkable DIPA. It was can release day for Hopeless Romantic and they only had 10 cases for sale. The 60 4-packs were gone in 25 minutes.

The locals explained that DeDona might seem quiet and aloof, but that’s simply the result of taste-testing beer every few minutes through a 12-hour shift. “He’s not mean, he’s just a tiny bit buzzed all the time,” one told me. I’m sure it was a slight exaggeration.

From there, I had to visit Ogie’s Trailer Park just to look around the dive bar theme park in Federal Hill. I grabbed the best looking selection, a Foolproof Backyahd IPA (6% ABV). In retrospect, it’s obvious that I chose it for the catchy New England-y name. Backyahd is another cloudy orange IPA, but unlike the Hopeless Romantic DIPA I’d just tried, it had very little malt backbone and was just decent. But you don’t go to Ogie’s to be a beer snob. The high point of the trip to the faux trailer park was the men’s bathroom that plays nothing but Willie Nelson and the women’s room which plays nothing but Dolly Parton (it was an accident).

It used to be that the Southern part of the state had the great beaches and the northern part of Rhode Island had all the fun. Down in South County, where I vacation, they’re catching up fast. You’ve got to pay a visit to Sons of Liberty in Wakefield. They started as a distillery, but since whiskey starts as beer, they’ve become known as a craft brewery as well. Most interesting was trying the Battle Cry Single Malt Whiskey and their Battle Cry Belgian Trippel (8% ABV) to trace the genesis of that mellow whiskey. Who doesn’t love this kind of science class? The well- appointed taproom is crowded on weekends. Also not to be missed is Whaler’s Brewing Company in Wakefield with a large taproom and lots of good craft beer.

If you really want to feel the sudsy frenzy in South County, check out Proclamation Ale in West Kingston. This place made Long Live Beerworks seem like a country club. I checked their website for days before I made the trip, because they had simply run out of beer for nearly a week around the Fourth of July. They had a can release “party” on a Friday, and I waited in line for 45 minutes to get in. What I didn’t expect was that I could only buy a four-pack to go. The cute tasting room is simply a facade. I asked if I could crack their Mouthbreather Mango IPA (7.5% ABV) right there on a barrel and they apologized that I couldn’t drink it there or in the parking lot. Silly laws made by lawmakers who don’t understand a bit about the brewery business seem to run like a current through these United States and Rhode Island is no exception. It then occurred to me that the other hundred customers in line were all buying this beer to take home. Impressive. When I got home, I cracked it and found another delightful chewy, cloudy, and spicy beer with a big kick. Try to get to Proclamation quickly, because they will be moving soon and possibly up north.

Onward to Cranston, where I hit another tasting room in another boring-looking building. Revival Brewing is attached to the restaurant Brutopia, which pours Revival’s beers and serves some of the best barbecue in New England. I was content because this was a more relaxed scene than the frenzy of Long Live Beerworks. It wasn’t a can release day but just another Friday. In fact, I was the only customer at the tiny tasting room for over an hour until this total hipster pulled up to the bar and showed me her new vinyl additions. I felt very old since I’d owned all of her “vintage” records at one time until my brother sold them for weed one day.

Sean Larkin is a big man. He was also casually carrying a machete around when I met him. He’s bold. He’s brash and, as I’d heard from the beer cognoscenti in Providence, he likes to talk a little RI brewery smack. That right there tells me the RI craft scene has come of age, because there’s nothing better than some friendly competition. The force behind Revival, Larkin spent 20 years in brewing, including stints at Narragansett and at Trinity, before going out on his own. I started with a “What Cheer” Pilsner (5% ABV). It was light and refreshing and all things a Pilsner should be, but after all my extreme tasting, I knew I needed to hit a “You Thirsty” New England IPA (6.5% ABV), all unfiltered and hopped to the heavens with Citra, Galaxy, Mosaic and Azacca. It was delicious and had a powerful mouthfeel for 6.5% ABV. A keepah for sure.

Larkin commands a 20 barrel brewhouse and Imperial Stouts are his personal favorite. He’s watched Rhode Island go from 6 breweries to 14 in just a few years. Asked where he sees the state’s beer scene in 10 years, he didn’t hesitate to answer.

“More brewery direct beers,” he said. “The personality-driven breweries will succeed. The ones that identify with their customer base. And the one’s that aren’t true to their heart and their customer base won’t be able to navigate through all of this.”

He seemed humble to me when he said “we haven’t become popular yet.” This from a guy who’s distributing his beer in three states and Japan.

No matter where you find yourself in the Ocean State, you’re never far from a great beer and making new friends. Instead of filling my car with beer to take to Rhode Island like I did 10 years ago, I found myself filling up the car to take these beers home with me. Well-played, Little Rhody, well-played.